About the Discipleship Ministry 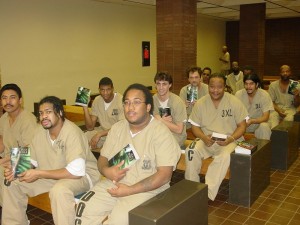 In 1984, God led Bill Street, Jr. to develop a discipleship ministry for prisoners via the mail. At the time there was no other prison ministry in the country doing that. When Bill’s book – A Voice Behind Bars – was mailed to the chaplains, the inmates would read it and then write to the ministry. Bill developed personal letters filled with anointed teaching material. When the inmates wrote, each letter was read by a staff member who helped Bill in processing the mail. This enabled him to respond promptly with mini-books and Bibles. Every letter that went out to inmates was personally signed by Bill and he still signs all inmate letters today.

Hundreds of inmates have written to the ministry for over 17 years. The ministry has never failed to answer an inmate’s letter.

When Bill conducted a crusade behind bars, every prisoner would receive a free copy of his books. After the crusade he would encourage every prisoner to write him, helping get more of God’s Word into their hands. The mailbox would be flooded with inmate responses and salvation decisions for Christ. To date, Bill has received well over 439,000 signed decision cards from inmates all across America.

Over the last 40 years, the ministry has distributed hundreds of thousands of books and Bibles to chaplains in over 1,261 prisons. At the present time, the ministry disciples between 16,000 and 18,000 inmates a year through the mail. The discipleship ministry ensures that every prisoner receives quality teaching on a regular basis delivered right in their cell.

During this same period of time, God led Bill to develop “Cell Group” leaders behind bars. The Cell Group leaders were responsible for holding group prayer meetings in each prison. They also got the ministry books and resources into the hands of other inmates. The Cell Group leaders were the ministry’s hands extended to all the various prisons around the country. In addition, Bill began to teach inmates how to evangelize the other prisoners in their facility. This led to an explosion of salvations in every facility. Today, the ministry has over 700 cell group leaders around America representing the ministry each and every day!

Bill credits the discipleship ministry and cell group leaders, along with his books, as the major factors that have increased the ministry’s productivity and effectiveness behind bars. The ministry is also grateful to all the chaplains across America who helped make this prison ministry what it is today by allowing Bill’s books and materials into the prisons… without their support none of these accomplishments would have been possible.